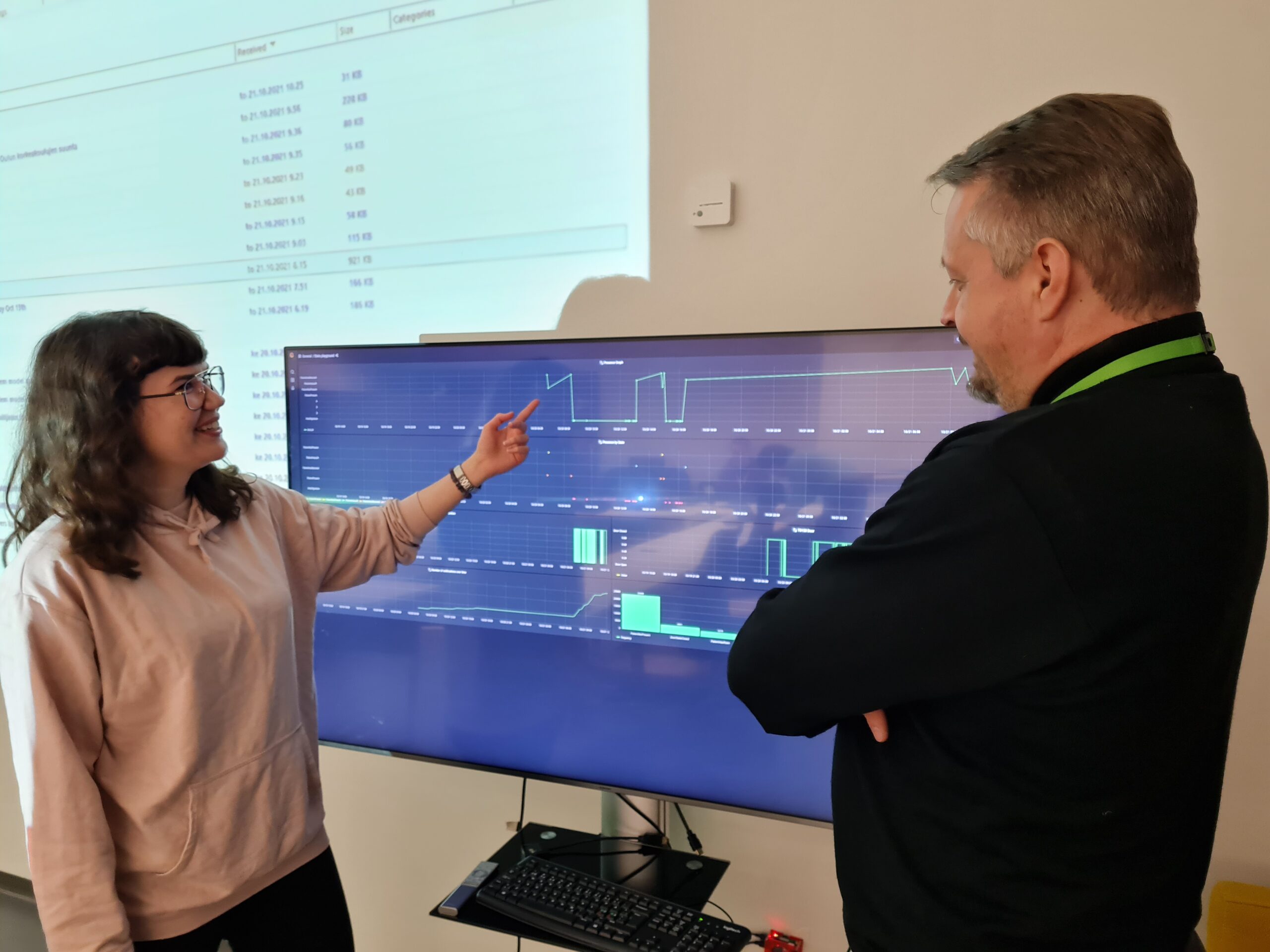 The Smart Campus software (SW) team has been working intensively on a Smart Nursing Home Proof of Concept (PoC) since early summer 2021. The use case is an ambient assisted living environment for elderly people where residents have their own rooms and caretakers are in the same premises to provide care when needed. Two groups of users are considered for the initial PoC: caretakers and residents.

Currently, the prototype focuses on recognizing potentially dangerous situations to the resident and uses stationary sensors to monitor a room. Alerts do not require any action from the resident, such as pressing a button or pulling a lever, which is often the case in similar real-life systems in nursing homes or independent living units.

The initial PoC demonstrates how an alert is launched if there are changes in door status, resident’s presence or if falling is detected in the demo room.

Working on various data sources and independence are key elements from the Smart Campus point of view. “Most commercially available sensors come with their own mobile app and it is nearly impossible to separate the sensor from the app and use another one,” says Elina Mannermaa, member of the SW team, who focuses on sensor configuration and machine learning for falling detection.

“The heterogeneity of sensor data structure and communication protocol become apparent when working with different data sources in this PoC,” confirms Da-Lun Chen, who is a full-stack developer and the scrum master of the team.

The system uses a dedicated client component to communicate with the data source on the edge node that subscribes to smart campus sensor data. If the edge analytics component identifies an event, it passes the event to the edge node gateway component, which then sends a notification data transfer object with required properties to the cloud server for creating and storing notifications.

The initial PoC has been designed and implemented to minimize the need for storing personal data. The falling detection feature analyzes thermal images directly without storing any images in the database. As a result, it can detect falling in the room and generate notification to the caretaker without the need to store the images.

The other deployed sensors do not collect personal data – they collect ambient data such as temperature and occupancy in the room. The data is mostly stored in the Smart Campus database while some used secure third-party databases.

The only personal data are user accounts, which are stored on the cloud database to facilitate association between registered users and rooms, and between the users and edge nodes. The former association enables the user of the PoC to get notifications concerning her or him, and the latter facilitates edge node management. Currently, only edge nodes registered by the user can send events to the cloud server.

The PoC uses token-based authentication to allow only authenticated access to the data via the REST API. To prevent accidental data deletion during the demo period, the API has been configured to prohibit deletion. In the future, role-based authorization can be added to facilitate more granular access control to the data.

New technologies into use

The PoC is constantly evolving. “From working on it, more ideas have emerged,” the team members note. “We have also received innovative ideas from early stakeholder feedback. In the future, it is anticipated that more dedicated client components will be designed and implemented to interface with other data sources.”

So far, working with various data sources has been both challenging and rewarding. “To me the most interesting thing is seeing how the PoC analytics component is evolving,” says Risto Jutila, who is a full-stack developer from the team and focused on the back-end and UI components during the development. “The component went from sending everything as a notification to sending notifications that allow us to make an educated guess as of what may be happening near the sensors.”

“Neural network analytics service was interesting to implement,” concludes Janne Kerola, who is another full-stack developer from the team and has developed the software components for the edge node. “We are using many cool new technologies I’ve never had a chance to learn before this project. I’m eager to expand the project, just to get a chance to try out new things!”